Najwa S. Wednesday, July 4, 2018, July 04, 2018 EDT Last Updated 2018-07-04T08:10:27Z
For those of you who feel the features of Android Auto and Apple CarPlay are not too important, maybe this content will answer it. At least the AAA Foundation for Traffic Safety concerning road safety has recently received data for the study of infotainment systems in cars. This study is conducted for calling and navigation functions where both of them are the most consuming concentration while driving. 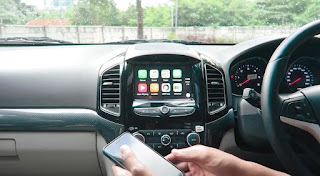 The study compared the two technologies with an OEM head unit that already supports telephone and navigation connections. They themselves found that the use of Android Auto and Apple CarPlay can decrease up to 24 percent of the time responding to the phone (5 seconds) and 32 percent of the time to use navigation (48 vs. 33 seconds, 15 seconds different).


Although the impression for a moment, 1 second in driving will be fatal consequences if the rider does not focus. At a speed of 60 km / h in 1 second approximately we've drove 15 meters, while 30 meters at 100 km / h. Of course the late response braked so far it would be fatal if we are careless is not it? 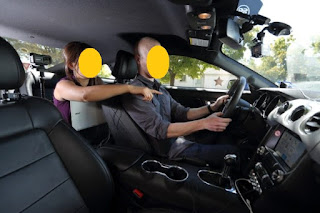 Based on this study AAA itself suggested that the driver's eyes can not be separated from the highway focus more than 2 seconds. This is supported by data stating that about 3,500 deaths and 390,000 accidents in the United States occurred due to drivers who were distracted from the focus to the highway. FYI, this study was conducted using the ranks of Honda Ridgeline cars, Ford Mustang, Chevrolet Silverado, Kia Optima and Ram 1500. 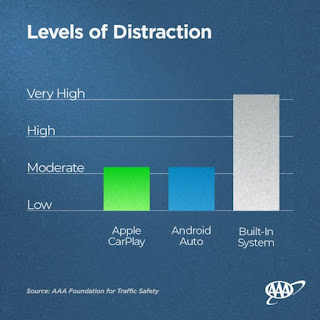 
As for the smartphone they use is LG K7 and Google Pixel 2 for Android base while iPhone 7 for Apple CarPlay. In conclusion, although Android Auto and Apple CarPlay technology is very positive, in this case for safety, does not mean they are danger-free. Still using both of these things disrupts the concentration of the driver, but at least now they are safest.