The satellite that can emit light is claimed eight times brighter than the original moon, according to state media People's Daily, and is part of China's growing ambitions in space projects. 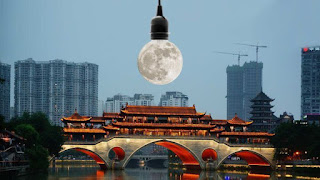 Chinese scientists plan to send three artificial months into space in the next four years, and the artificial moon is made of materials that reflect light like a mirror - thought to orbit at 500 kilometers above Earth and illuminate areas with diameters of 10 to 80 kilometers.

Wu Chunfeng, chairman of the Chengdu Aerospace Science and Technology Microelectronics System Research Institute Corporation, which developed the project, said that the burning satellite would provide "light like at dusk".


"The brightness and timing of satellite services can both be adjusted, and lighting accuracy can be controlled within a tens of meters radius," Wu told state media agencies.

Wu Chengfeng added that three artificial months would operate alternately to significantly reduce the electricity consumption of various infrastructures, especially during the winter.

The light reflecting satellite is designed to complement the moon at night.


'Who pays for it and what is the purpose?'
Wu said 50 square kilometers of artificial lighting in Chengdu could save around 1.2 billion yuan, equivalent to Rp 2.6 trillion in electricity costs each year.


The artificial moon can also be used to illuminate areas that experience power cuts caused by natural disasters such as earthquakes, he said.

In addition to its economic benefits, many comments from residents on China Weibo's social media platform worry about potential negative effects such as how the artificial month will affect sleep patterns and how much money is being sucked to finance the project.


"What's the point of creating an artificial moon that violates the laws of nature?" Shaolin Xu, a famous commentator who has 1.4 million followers on Weibo, said in his account.

"Who paid for it and what was the purpose of the launch?"

"This is definitely a good project to save energy and reduce pollution," another Weibo user commented.

Xinhua reported that the idea of ​​the man-made moon came from a French artist who imagined hanging a necklace made of mirrors in the sky to illuminate the streets of Paris at night.

Russia tried to launch a "25 meter diameter space mirror" but the project was suspended in 1999.