The Largest in the World, the Blue Whale is Much Larger than Dinosaurs -->

› Animal › Animals World › Blue Whale › Dinosaurs › Human › Information The Largest in the World, the Blue Whale is Much Larger than Dinosaurs

The Largest in the World, the Blue Whale is Much Larger than Dinosaurs

Who's the giant among the giants starts from something much smaller.

Like all whales, blue whales (Balaenoptera musculus) evolved from four-legged mammals that lived on land about 48 million years ago.

This ancient ancestor, Pakicetus, only has a length of 1.8m. He lives on the river and some of his offspring adapt to life in water which eventually gave birth to a fully aquatic creature called Dorudon ("Spear Tooth"), which lived 37 million years ago with a length of 4.5m.

At Dorudon, we see the beginning that makes whales so special. His nostrils retreated from his snout to the top of his head, his front legs became stiff fins, his body extended, his hind legs disappeared and his tail evolved into two elastic anchors, which pushed the animal forward through up and down motion in the water, not side-to-side movements - fish tail side. 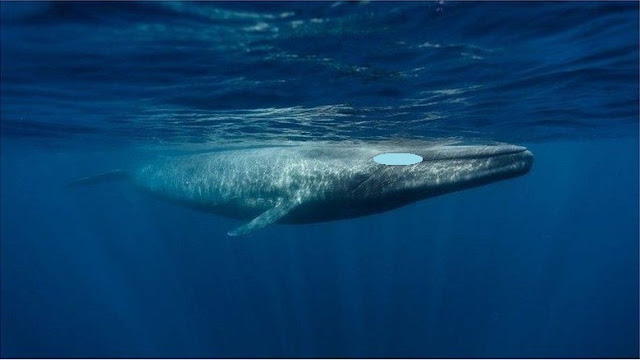 
The evolution of Dorudon to the blue whale involved a number of changes to overcome its enormous size. Here are nine changes you need to know:

1. Inhale deeply!
Blue whales can dive for up to an hour in one dive, darting to a depth of 100m, so they need very efficient lungs to survive. Two large blow holes, large enough for small children to crawl into, allow rapid and efficient oxygen exchange. Blue whales replace between 80 and 90 percent of oxygen in their lungs every time they breathe, compared to only 10 or 15 percent in humans.

2. Can you hear my beat?
Oxygen is pumped around its extraordinarily large body by the heart of four chambers, which are the same size. It weighs around 900kg - the size of a Mini car - the heart of a blue whale beats every 10 seconds, pumps 220 liters of blood throughout its body, and pulsates so hard that it can be heard from a distance of 3 km through sonar equipment.

3. Thick skin
Blue whale skin is unique, just like fingerprints. The pale bluish gray gives the blue name in the blue whale, although the skin can also look silvery gray or brown, depending on the light. The blue whale has between 80 and 100 long grooves that radiate along the throat and chest.

4. There is no time (or ability) to cry
Blue whales have relatively small eyes for their body size - each the size of a grape - and their vision is considered weak. They have no tear glands or eyelashes.


5. Your voice comes out
Although it has no external ears, blue whales are believed to have excellent hearing, using air sinuses and bones to detect sounds. They communicate using low frequency whistles or roaring sounds that can travel hundreds of kilometers and reach 188 decibels - louder than passenger jets.

6. Big mouth
Their gigantic mouth - large enough to hold 100 people - can catch a large number of prey with every gulp of water, filtering out the nutritious krill from the released water with stiff hair growing from the palate. During summer, they eat up to 6,000 kg krill a day.

7. Awaken the air
Blue whales reach sexual maturity between the ages of five and 10 years. They search for warm equatorial waters before embarking on elaborate mating rituals involving males and females rolling over one another, diving in the depths of the ocean, then suddenly swimming to the surface to copulate. Male whales have the largest penis in the animal kingdom, about 30cm in diameter and 3m in length.

8. A thirsty baby
Blue whales are placental mammals with the fetus developing in the mother's uterus. The developing fetus grows rapidly and after seven months, the length is around 3.5m.

The whale child is born with a tail first after 12 months and weighs around 2,700 kg, swimming directly to the surface for air.


The baby suckles on the two nipples of the mother, which feeds 180 liters of fat-rich milk every day, allowing it to grow by 90kg every day. Weaning occurs about seven or nine months, when the baby's whale reaches around 15m.

9. Total population
It is estimated that there were more than 250,000 blue whales. Now it is estimated that only between 10,000 and 25,000 are left in the world. After decades of being hunted for meat, oil and other valuable body parts, they are now classified as an endangered species on the IUCN Red List.