Viewed updetails.com from photos of Sector Distribution and Allocation of Assets on the Effective Search Search Area from October 30-31 2018 uploaded on Twitter account Head of the Information Data Center and Public Relations of BNPB, Sutopo Purwo Nugroho, Tuesday (10/30/2018) there 13 sectors are divided for the purpose of searching for the plane. 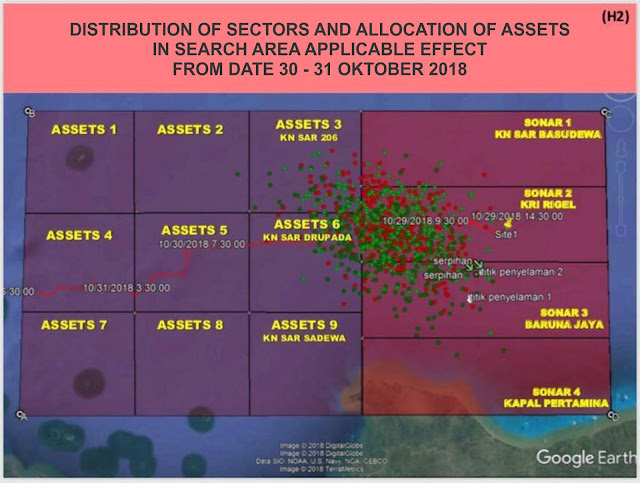 There are 9 sectors that are occupied by 1 asset each. While the other 4 sectors were filled with ships with sonar equipment such as Pertamina Ship, KR Baruna Jaya, KRI Rigel, and SAR SAR Basudewa.


In addition, there are also a number of points on the map. Some are marked as green and red.


However, it is not explained in detail the meaning of the color. Then there is also a piece of writing, rescue point 1, and rescue point 2.

There is also another map that is titled search heli area H.2. This map also shows a number of points above the sea marked in blue, green and others.

"The search operation for Lion Air JT-610 aircraft in Karawang waters continues to be carried out by a joint SAR team coordinated by Basarnas. SAR operations are carried out per sector for sea and air operations on 30-31 / 10/2018. Sonar technology is used for aircraft detection on the seabed, "Sutopo wrote.


Previously, Dirops Search and Aid Basarnas Brigadier General Marshal Bambang Suryo Aji said the search area was determined around 150 nautical miles (NM) square. According to Bambang, the area was determined based on the current calculation. The search for victims who were on the surface and the possibility of being dragged by the current was anticipated.

"We checked the radius around probably between, the area is around 150 nautical miles square," said Director of Search and Basarnas Relief Operations Brig. Gen. (Mar) Bambang Suryo Aji in his office, Kemayoran, Central Jakarta, Monday (10/29) yesterday.


Lion Air JT 610 crashed in Karawang, West Java, on Monday (10/29) at around 06.33 WIB. The Boeing 737 MAX 8 aircraft departed from Soekarno-Hatta Airport to Depati Amir Pangkalpinang Airport, Bangka Belitung with 189 people in it.