5 Surprising Facts about the Desert -->

5 Surprising Facts about the Desert

Najwa S. Tuesday, January 1, 2019, January 01, 2019 EDT Last Updated 2019-01-02T02:22:41Z
Desert is indeed often perceived as a place with a wide area and filled with sand. Barren, barren, and hot may be the key word that always appears when talking about deserts. However, it turns out that the desert is not always talking about it. Then, what are some interesting facts that are not widely known about the desert? Here are 5 interesting facts: 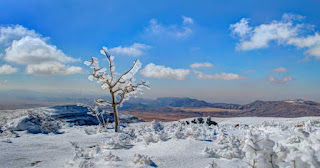 
The deserts that are spread throughout the continents of the world are almost not used as a place to live because the land is quite barren and difficult to get food, water for life and desert storms are quite disturbing. But some countries in the Middle East have begun to spread their wings to areas around the desert by building pretty beautiful cities.

2. Snow in the Desert

According to science, if an area has certain rainfall (allowing rain) and has enough low temperatures to cool down water, then the area allows snow. Desert is not a region without rainfall, only the rainfall is very small. But when it falls in the winter with the right time, snow is very likely to fall in the area.


This was proven precisely in 1979, the lowlands of the Sahara desert recorded their first snowfall in living memory. It snowed in places in southern Algeria, where a half-hour snowstorm stopped traffic. In winter, the temperature drops quite low at the top of Tahat, the highest mountain peak in Algeria, causing snow every three years.


3. The Most Isolated Tree on Earth

Most living trees coexist and colonize very much in number, but not with this one tree. The tree that was once considered the most remote tree on Earth is the only tree in a distance of more than 400 kilometers.

The Ténéré tree is the only tree shown on the map on a scale of 1: 4,000,000. This tree is located near a 40-meter deep well found in the Sahara desert region. But unfortunately the tree that was quite horrendous and became the highlight of this collapsed in 1973, was hit by a truck driver who allegedly drunk. Until now this tree is still an interesting thing so that the local government made a monument to commemorate its existence.

4. Desert, Not Just about Sand

In geographical terms, the desert is an area that receives a rainfall of at least 250 millimeters per year. Usually if we talk about deserts that must have occurred in our minds there are deserts in Africa and eastern countries in Asia. But it turns out that the desert is not just talking about the area or the scattered barren shadow.


The formation of the desert itself is divided into two, that is due to the weathering process of rock types and excessive evaporation of ground water. Deserts are usually separated based on the biome that lives inside, which is divided into cold deserts, hot and dry deserts, semi-arid deserts and coastal deserts. The majority of the desert that covers the earth itself turns out to be in the polar region.

5. The Biggest Desert in the World Not Available in Africa or Asia

The Antarctic Desert is a pretty amazing area with a very cold area and isolated from the outside world. The area reaches 14 million square kilometers making it the widest desert on Earth that belongs to the cold desert. The rainfall in the area itself is less than 51 millimeters per year. Most of the area is covered with ice, which covers approximately 90 percent of Earth's water.


At least 2 percent of this largest desert is not covered with ice and is a habitat for animals such as penguins, seals, birds and other animals. Other areas or 98 percent of the area are covered with ice with a thickness of up to 1.6 km. Like in other deserts, wind storms still come to form a storm that can reach speeds of 320 km per hour.