Sweetness of 2019 NBA All Star MVP for Durant

Durant became the MVP in the 2019 All Star match at Spectrum Center on Monday (2/18/2019) afternoon WIB. He brought the LeBron team to win 178-164, after falling behind in the first two quarters.


The 30-year-old scored 31 points, plus recorded seven rebounds, two assists and two blocks from 25 minutes of action in the field. The points are the highest in the team, even just losing to Giannis (38 points) from all the players who appeared in this match. 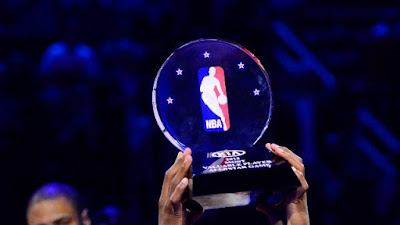 
For the Golden State Warriors Small Forward, the NBA All Star MVP title is the second time after 2012. Can reach it again after seven years, also by bringing the team to rise from a disadvantaged position, making this title feel very sweet.

"It all feels sweet to me. I mean, it is difficult to measure. All awards are special. But because they can only be on the field with the best players to play the game," said Durant told ESPN.

"And being able to win MVPs in front of my family and friends is quite pleasant. I will just keep trying to collect them," he added.

The LeBron team is 13 points behind 82-95 on halftime. They even got 20 points away from the Giannis team.

But LeBron et al reacted in the third quarter, one of them with three points. The LeBron team scored a total of 35 points, a record in the All Star game.

Durant revealed the key to the revival was a neater and more solid defense. In the end they are more comfortable when attacking.


"We just don't want to lose. We know we have many talents who can do many things. We want to be better on the defense side," said Durant.

"I think when this team locked the third quarter, it really changed the game. It was fun to be among these great players," he said.