Is This Really the Original KFC Fried Chicken Seasoning Recipe? -->

Is This Really the Original KFC Fried Chicken Seasoning Recipe?

Since it was founded in 1952 in Kentucky, United States, the original KFC fried chicken recipe has always been kept confidential. Reportedly the Original Recipe is stored in a safe in Louisville, Kentucky. Only a few people know the recipe and all of them have been bound by contracts so as not to divulge it.


Sophisticated technology makes the act of handling the original KFC fried chicken recipe even more complicated. While one company mixes a formulation that represents a portion of the recipe, another spice company mixes the rest. Then, a computer processing system is used to standardize the product mix. This is done to ensure that no company has a complete KFC recipe. 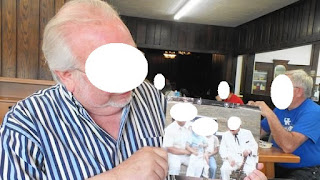 But recently news of the original recipe for KFC fried chicken was found in Corbin, Kentucky. The story begins when a reporter for the Chicago Tribune (19/8) meets Joe Ledington, nephew of Colonel Sanders who is now 67 years old.

In the archive there are many photos, news clippings in newspapers, and other family documents. But the handwritten recipe on the back of the archive is the most interesting thing. 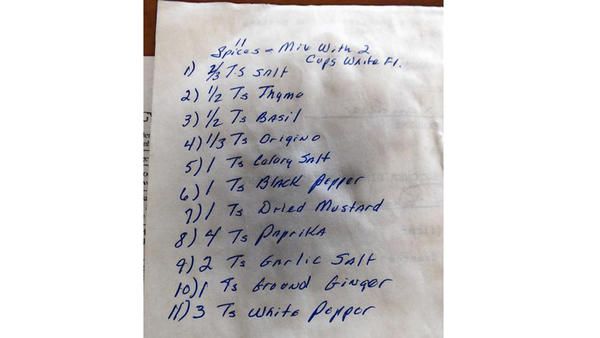 On a piece of white paper, there is writing blue inked with the title "11 Spices - Mix with 2 Cups of Wheat Flour." Underneath it then there is a sequence of the names of the spices and the amount needed as follows:

When asked if this was the original recipe for KFC fried chicken, Ledington agreed without hesitation. But after some time after the interview, the Chicago Tribune reported that Ledington suddenly doubted the authenticity of the recipe.

"I only had the file for 4 years after my sister died," he explained. He added that the handwriting did not belong to Colonel Sanders but Ledington was convinced that the herbs and spices listed were those used by KFC.

"When I was 10, 11 and 12 I helped to mix herbs and spices in the garage," Ledington said. According to him, the key ingredient in the recipe is white pepper.

Ledington said, "I call it a secret spice. Nobody in the 1950s knew what white pepper was. They didn't know how to use it."

The Chicago Tribune team also had time to try to apply this recipe. According to them, it feels very good.

Regarding the discovery of the supposedly original spice recipe, KFC commented, "Over the years many people claim to have discovered a secret recipe, but none is true."

Previously the owner of the MZMARGO account had shared KFC's secret recipe on the Spark Recipes site. Inside are 11 secret herbs and spices consisting of paprika, garlic powder, chili powder, and black pepper.

Other herbs consist of rubbed sage, allspice powder, oregano powder, crushed basil leaves, and crushed marjoram leaves. Everything is mixed with one teaspoon each, except for two teaspoons paprika.