Najwa S. Friday, March 20, 2020, March 20, 2020 EDT Last Updated 2020-03-20T13:32:39Z
In recent times, news about the Japanese brand, Nissan, has been struggling with negative things. Starting the problem with Ghosn, the decline in sales, factory closures and several other news. Well, this time, the news that appears is not related to negative news. In fact, it seems that Nissan wants to bring a new spirit by rebranding their logo. Yep, a new logo seems to have been prepared by Nissan to be introduced to the public. 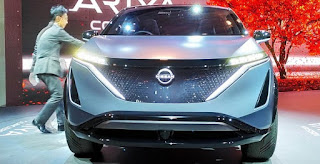 Recently, Nissan told me to fill out patents for new logos registered in the British, Peru, Uruguay, Chile and Argentina areas. If we pay attention, the new logo from Nissan is minimalist. Actually, the minimalist concept is indeed being favored by automotive manufacturers, for example like VW which also makes their logo flat and BMW introduces a new logo with transparent colors. If we pay attention, the logo change from Nissan is quite extreme. Previously, we recognized the Nissan logo with silver chrome made in 3 dimensions, but this time the logo became monochrome and flat.


As a form, this new Nissan logo still implies the shape of the old logo. The shape is dominated by a circle with Nissan Horizontal writing on the middle side that is like cutting the circle. This logo itself actually had already been implied in the Nissan logo embedded in the Nissan Ariya Concept which was introduced some time ago. So, it is very likely that Nissan will soon implement this new logo on their cars in the near future. Well, another interesting thing, Nissan did not only patent one logo, but two. And the second logo is a Z-shaped logo. Yep, this is the Nissan Z Series logo.

So what do you think, friend?

I am hoping the same best effort from you in the future as well. In fact your creative writing skills has inspired me. info,