Brentford - Manchester United back to winning ways in the Premier League Brentford Vs MU Matchday. Come to the headquarters of Brentford, MU gain full points after winning with a score of 3-1. 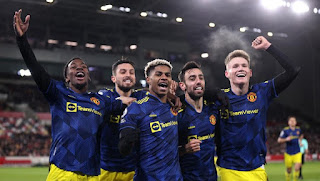 Manchester United won the away match against Brentford with a score of 3-1 in the Premier League. (Photo: Getty Images/Alex Pantling)

The Brentford vs. MU match will be held at the Brentford Community Stadium, Thursday (20/1/2022) in the morning WIB. Both teams played a goalless draw throughout the first half, but the Red Devils were quite troubled by the home team's attacks.

After halftime, the deadlock was broken after MU opened the scoring from Anthony Elanga. The visitors then added two other goals through Mason Greenwood and substitute Marcus Rashford. Ivan Toney created a Brentford consolation goal in the final minutes of the game.

With this result Man United finally won again after being defeated by Wolverhampton and detained by Aston Villa. Even so, MU has not moved from seventh position on the standings after collecting 35 points from 21 matches, two points away from West Ham in the top four. On the other hand, Brentford is still in 14th place with 23 points.

The course of the match

Brentford created the first chance. In the fourth minute, Brian Mbuemo won the ball duel with Alex Telles and then pierced the left wing. The crossing ball was passed into the penalty box but hit the MU players so that it turned to Mathias Jensen. He released the kick first-time though wide.

Brentford's threats were relentless. United's defense was open so that the breakthrough ball in the penalty box was continued by Christian Norgaard with a shot that was successfully saved by David de Gea. Furthermore, Vitaly Janelt, Martin Sorensen, and Norgaard took turns firing shots even though they had not met the target. MU goal is still safe, the score 0-0.

Diogo Dalot created a good chance in the 25th minute. From the edge of the penalty box, Dalot curled a shot into the top corner of the Brentford goal which was narrowly wide.

Toney's through ball passed Jensen so he only had to deal with De Gea. However, Jensen's shot was blocked, the rebound was caught by Janelt but hit Raphael Varane before going off the mark.

MU started the second half better. Bruno Fernandes's cross met Cristiano Ronaldo then headed the ball which slid into the Brentford crossbar before being secured.

Brentford replied. Mbuemo and Janssen's collaboration allowed the last-named player in the third of the field. Janssen fired low even though it could be caught by De Gea.

In the midst of Brenfrod pressure, MU managed to steal a goal. Anthony Elanga brought MU 1-0 lead in the 55th minute. Starting from an attack from the right wing, Fred released an accurate pass into the Brenford penalty box. Elanga controlled the ball with his feet, then rounded Lossl with his header.

Ronaldo received a beautiful pass and then passed it on to Bruno Fernandes who ran forward with Greenwood. In the penalty box, Fernandes handed a low pass which Greenwood easily slipped.

Scott McTominay worked hard to win the ball in midfield then sent a low pass to Bruno Fernandes. Fernandes' short pass to Rashford on the right side of the penalty box was completed with a shot that nestled in the top side of the Brentford net.

In the last six minutes, Brenford reduced the score to 1-3. From a free kick on the right side, the ball fell into the penalty box and created chaos in front of goal. Ivan Toney rattled the MU goal with a shot from close range.

Bruno Fernandes almost scored Manchester United's fourth goal. However, his chipped shot was too weak for the ball to be secured.