Create Gasoline from Palm Oil by Lecturer Team of Bandung Institute of Technology (ITB), It's been Tested -->

Create Gasoline from Palm Oil by Lecturer Team of Bandung Institute of Technology (ITB), It's been Tested

After biodiesel and bioavtur, now there is benzene for gasoline made from palm oil. The vegetable gasoline was the result of a research team from the Center for Catalysis Engineering, Bandung Institute of Technology (ITB). Bensa has even been tested on two research team cars that traveled from Kudus to Bandung a week ago. 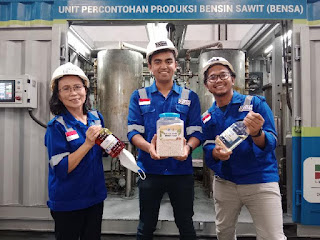 The ITB lecturer team made gasoline biofuel from palm oil (bensa) complete with raw materials and catalysts. Involving a number of corporate partners and research funds of billions of rupiah, Bensa has been tested for use on motorcycles and cars. (Doc. ITB Team)

The use of benzene was after the research team returned from a demonstration on vehicles at PT Pura Barutama's Engineering division in Kudus, Central Java, on January 11, 2022. The company is a partner of the ITB research team which is the pilot site for gasoline production. From the research team's design, PT Pura's refinery is able to produce approximately 400-500 liters of gasoline per day.

The catalyst reactor for benzene is now placed in the ITB campus laboratory. "With this reactor, we can make special catalysts for 40-50 kilograms of benzene per batch," said member of the research team, Melia Laniwati Gunawan, to Tempo, Tuesday, January 18, 2022. Melia added.

According to Melia, during the trip from Kudus to Bandung the research team's car drove smoothly. "Ordinary trips are like using fossil fuel purchased from gas stations, without any problems," he said. Previously in 2019 team members had tested it for use as a fuel for motorcycles.

Its use, Melia said, without the need to change the vehicle engine and fuel tank. The reason is because the chemical compounds in gasoline are the same as those in gasoline from fossil oil. The difference is in the exhaust gas. Petroleum gasoline still contains sulfur or sulphur.

"For benzene, because it is taken from palm or vegetable oil, there is no sulfur," said the lecturer from the Chemical Reaction and Catalysis Technology Expertise Group at the Faculty of Industrial Technology, ITB.

According to him, Bensa can use all types or variants of palm oil to be squeezed to produce crude palm oil (CPO). The subsequent processing is different from CPO for food or cooking oil. Especially for benzene, the processed product is called industrial vegetable oil (IVO) or industrial palm oil.

Together with PT Kemurgi Indonesia, supported by the Indonesian Biohydrocarbon Society and PT Pura Barutama, the ITB team led by Subagjo has built a demonstration unit (demo plant) to process CPO into IVO with a capacity of 6-7 tons per hour. The government of Musi Banyuasin Regency, South Sumatra, is said to have supported the IVO pilot unit which was built in 2020-2021 and has been able to produce IVO.

"Some of these IVO products are used as raw materials for making gasoline," he said.

The gas produced from the pilot unit has a Research Octane Number (RON) value of more than 100. The team lowered the octane number of the gasoline to 93 by mixing it with naphtha from fossil oil which has a low octane rating of around 70–80. The octane number is 93 to match fossil gasoline, which ranges from 90 to 98.

Melia said that the Bensa research was funded by the Palm Oil Plantation Fund Management Agency (BPDPKS), which began with the manufacture of the catalyst since 2016. "The total could be more than Rp. 10 billion," said Melia.

Head of the BPDPKS Service Program Division Arfie Thahar said IVO production was being developed on smaller scales, for example with a capacity of 5 tons per hour. With self-processing carried out through cooperatives of palm oil centers, the results are believed to be able to cut supply chains. 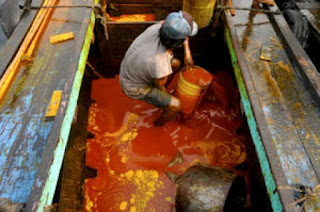 "From our own garden, we produce it in the form of IVO, we already have an example in South Sumatra," said Arfie, Tuesday, January 18, 2022.

Palm oil centers, Arfie said, spread from Aceh to Lampung, Kalimantan, and some in Sulawesi and Papua. The hope is that gasoline from Bensa's palm oil can all be made so that it can meet regional needs with cheaper transportation costs.