Many parents prepare powdered infant formula or baby formula in an inappropriate way. Although it can be consumed as an alternative to breast milk, formula milk powder must be made and served in the right way so that its benefits are optimal. 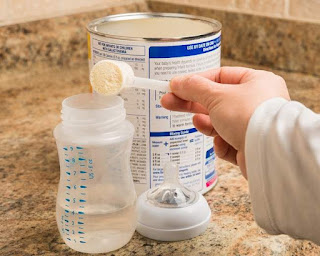 How to prepare powdered formula does require more attention than ready-to-drink formula and concentrated liquid formula.

For ready-to-drink formula, parents only need to open the package and put it in a bottle. Meanwhile, concentrated liquid formula needs to be added with water according to the stated rate.

To get optimal benefits, parents need to avoid some of the mistakes that are often made when preparing the following powdered formula:

1. Using water that is too hot

To make the milk dissolve, many parents consider freshly boiling water the best solution. In fact, the water temperature for dissolving powdered formula is ideally around 70°C. To use it, you can let the water sit for about 30 minutes after it boils.

The use of hot water is necessary to kill bacteria that may be present in the powdered formula, but not to the point that it is too hot for the little one's mouth.

2. Put the powdered milk before the water

In order to get the right dose, first put the water in the bottle. Check again whether the amount of water needed is appropriate. Use the measuring spoon provided in the package of formula milk.

Fill the measuring spoon to taste, not too little or too much. Also avoid adding too much powdered formula because it can make the baby dehydrated and difficult to defecate.

On the other hand, too little is known about powdered milk formula, which risks making the baby nutritionally deficient. Also avoid adding sugar or cereal in formula milk.

4. Touching the tip of the pacifier when preparing milk

After the powdered milk formula has been put into the bottle, it is not uncommon for parents to choose to hold the tip of the teat. It is feared that the pacifier can become contaminated with bacteria from the finger.

For this reason, it is recommended to only hold the edges of the teat. Then to make sure the milk dissolves, shake it carefully after closing the teat cover.

5. Giving milk that is too hot

Before giving infant formula powdered milk, you should put a drop on the wrist. Make sure the temperature is warm enough or not too hot. If refrigerating is necessary, flush the bottle with running water from the faucet. However, make sure the bottle is closed and does not get water in.

Immediately discard the remaining formula milk that has been left for more than an hour because it can invite bacteria. Paying attention to this is very important to prevent the baby from getting sick, even though at first glance it seems very unfortunate.

In addition, sometimes parents want practical measures to warm milk, namely by using a microwave. However, this can actually make the baby's mouth and tongue become injured due to unevenly hot milk.

It is no less important when preparing powdered formula milk is to wash your hands with soap and water, then dry. In addition, it is also important to keep the pacifier and bottle equipment clean. Wash baby bottles with special soap, then sterilize the equipment.

Don't hesitate to consult a doctor if your baby has health problems after consuming powdered formula, such as diarrhea, vomiting, and other digestive disorders. The doctor will give advice and appropriate treatment steps, according to your baby's condition.