With a new vehicle, Red Bull RB18, as a team that can perform full of action and give Mercedes a tight fight in the 2021 F1 season, the Red Bull team certainly can get a lot of attention right now. Especially when their spearhead driver, Max Verstappen managed to become the F1 world champion in 2021 in the final race in Abu Dhabi. Although full of controversy, in the end the FIA ​​did not change its decision and still made this young Dutchman the legal world champion.

Welcoming the 2022 season, Red Bull will be the second team to introduce their new car after HAAS last week. Their new car is now called the Red Bull RB18, just launched on February 9, 2022 last night. The team, which is based in Milton Keynes, England, actually doesn't want to reveal all the technical specifications at this time, so what do you think we can see in this new car?

In cars that are displayed in public, one big thing that we immediately notice together is the very dominant Oracle logo. Currently, Oracle has officially become the main sponsor of Red Bull starting this year for the next 5 years, even now the team name is "Oracle Red Bull Racing". The value of the agreement between Oracle and Red Bull for 5 years is estimated at 500 million US dollars. 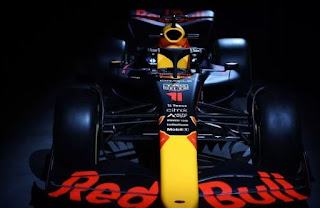 According to Christian Horner as the head of the Red Bull team, the data processed by Oracle is very helpful for Red Bull in formulating team strategies in each race. Keep in mind, this car is not necessarily a car that will actually race this season. Prior to pre-season testing in Barcelona, ​​all teams are predicted to make some small changes in certain details to optimize the performance of their cars, and Red Bull is no exception.

The big news for 2020 yesterday was Honda's intention to leave F1 after the 2021 season was over. After they became the engine that led Max Verstappen to the 2021 season champion, Honda changed his mind somewhat and would continue to make engines for Red Bull for the next few years before Red Bull actually made their own engines. However, Honda will not put its own logo on the RB18 body.

Instead, there is the HRC aka Honda Racing Corporation logo near the rear wing of this car. The Red Bull RB18 car will still be piloted by Max Verstappen, who just changed the number from "33" to "1" after he became world champion, then on Max's side will be present Sergio Perez aka Checo, the "strongest Minister of Defense" who is good at defense and tire management. Happy racing, Super Max and Checo!

"The Masters Real Estate" is official sales partner of Lahore Smart City and 1st Smart City which is Capital Smart City . We are one of the most enticing options on the planet of real estate. Our prestigious forum provides the potential solution of all your ambiguities regarding the purchasing of shops, lands, and houses.

We have engaged our teams in various cities of Pakistan as well as the online world to make our services accessible. The provision of reasonable price real estate properties by our company is attracting the residents and the foreigners. We have intended to provide luxurious construction projects and houses at affordable prices to our nation. One more socity launch soon which is Faisalabad Smart City .