Toyota Innova Hybrid, Is this the appearance it? Caught Tested on the Street -->

Toyota Innova Hybrid, Is this the appearance it? Caught Tested on the Street

Is this the appearance of the Toyota Innova Hybrid? Caught Tested on the Street

A mysterious car caught on camera being tested on the streets of Thailand. The car is suspected to be the latest Toyota Kijang Innova with a hybrid engine. 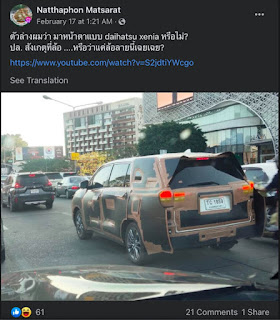 Recently, there have been rumors of a hybrid-powered Kijang Innova. The rumors grew stronger after the Minister of Industry Agus Gumiwang Kartasasmita revealed Toyota's plans to produce hybrid cars in Indonesia.

"PT Toyota also expressed a commitment to produce several types of electrified vehicles, which will begin with the Kijang Hybrid. And we will continue to support and encourage the acceleration of electrification products or pure electric vehicles," Agus said last week.

The appearance of a test car that looks like the Innova strengthens the alleged birth of the Innova hybrid. This car was caught on camera in Thailand. This photo was uploaded by a Thai netizen on the Veloz Club Thailand Facebook group. He thought this was similar to Daihatsu Xenia. But from its shape, not many think this is the latest Innova, maybe a hybrid Innova as stated by the Minister of Industry.

Marketing Director of PT Toyota Astra Motor (TAM), Anton Jimmi did not want to comment on the statement made by the Minister of Industry about the Innova hybrid. However, he did not dismiss rumors that the Innova would be embedded with hybrid technology. He only said that it was possible for the TNGA (Toyota New Generation Architecture) platform to be installed on the MPV which was born on June 9, 1977.

"The most important thing is how consumers can use this product better. Of course the TNGA platform will help but we will adjust the timing according to needs. It is possible what segment and in the future we will use this platform more, I think it will definitely open the opportunity," he said.

"About what kind of deer will come out and so on, be patient, we will inform you more," said Anton.

Toyota has admitted that the Japanese manufacturer will produce HEV (Hybrid Electric Vehicles) vehicles locally from 2022 for the domestic and export markets. This Toyota hybrid car product is also confirmed to be based on a model that already existed before.