The East Coast region of the United States was hit by heavy snowstorms and strong winds. Due to the snowstorm, nearly 6,000 flights have been canceled since last Friday (28/1).

It was reported that a number of airlines were affected by flight cancellations, including JetBlue Airways, American Airlines, Delta Air Lines, United Airlines and Southwest Airlines. 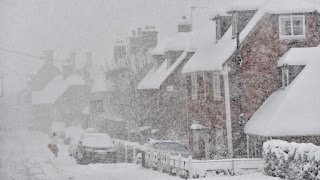 Hours before the snow and strong winds hit, five states had declared a state of emergency.

The storm began to hit the US East coast in the early hours of Saturday (29/1). By that time a few inches of snow had covered several states.

On Saturday night, the storm, known as Nor'easter, hit parts of New York and Massachusetts with up to 2 feet (61 cm) of snow. As a result of the blizzard, more than 95,000 homes in Massachusetts were reported to be out of power.

One of the worst-hit areas in Massachusetts was Cape Cod, where 100 customers in the city of Provincetown were affected by power cuts.

Experts have warned of blizzards and flooding in several places on the US East Coast.

Until Sunday (30/1) cold temperatures will still occur in most of the northeastern region.

Local meteorologist Matthew Cappucci told the BBC that snow volume was an issue with 8-10cm of snow accumulating every hour for one spot.

"No road crew in the world can handle this, and that means all highways are closed."

The National Weather Service (NWS) confirmed the storm had undergone bombogenesis, meaning cooler air mixed with warmer ocean air, causing a rapid drop in atmospheric pressure. This process leads to what is called a bomb cyclone.

The NWS in Boston warns that people should only travel in an emergency.

"If you must travel, bring winter survival gear. If you are stranded, stay with your vehicle." NWS appealed.

Blizzard warnings have been issued across the region, with the last such warning being issued in 2018.

The governors of New York, New Jersey, Maryland, Rhode Island and Virginia declared a state of emergency, telling residents to stay out of the way for their own safety.

"Strong winds, heavy snow, blizzard conditions - all elements of Nor'easter," said New York Governor Kathy Hochul on Saturday (29/1). He warned that freezing temperatures would continue to cause problems after the snow stopped.

Meanwhile, police officers in New Jersey are pleading with the public not to "complicate things by wandering around". Governor Phil Murphy said the state's coastline was "further devastated" by the storm.

In Connecticut, bus operations have been suspended until Sunday (30/1). The governor of Rhode Island, Dan McKee, has announced the closure of several bridges due to "dangerous conditions".

Despite the warnings, some people still go out to have fun when it snows. As in New York, children sledding in Central Park and snowballing in Washington Square Park.

Florida, usually known for its mild winters, is also expected to experience its coldest temperatures in recent years.