Yamaha Fazzio Hybrid Test in the City, Efficient! But… -->

Yamaha Fazzio Hybrid Test in the City, Efficient! But…

After successfully launching the Yamaha Fazzio Hybrid Connected last January, PT Yamaha Indonesia Motor Manufacturing (YIMM) invited the community and several media to do a test ride around the city of Bogor on Thursday (03/02). Taking the route with a distance of 19.9 km, this activity is of course carried out with strict health protocols ranging from on-the-spot antigens to providing masks for Yamaha Fazzio city touring participants. 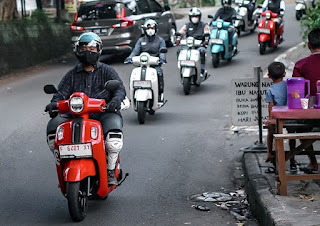 Our first impression about the riding position, the combination of a handlebar position that is not too low, a wide foot deck, and a wide seat make the Yamaha Fazzio Hybrid comfortable to ride for up to tens of kilometers. So that the ergonomic triangle can also adjust the various postures of Indonesian people. However, there is one drawback that we encountered on the seat, namely about the softness. For the size of the Yamaha motorcycle, which is famous for its soft seats, Fazzio is still tougher than his younger brother Yamaha Gear 125, although the foam still feels thick. 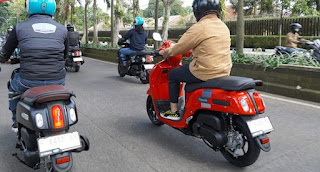 The hardness of the seats is also supported by the slamming of the suspension which turns out to be quite hard. Rebound on the Yamaha Fazzio suspension feels fast so that when passing through uneven roads or accidentally passing through potholes, the road feels quite rough. But this deficiency can also be an advantage, because the hard suspension slams Fazzio becomes more stable both at low speeds and above 70 km / h though. Overall the ergonomics triangle is very good, it would be better if the seats were softer, and the suspension was sufficient for use in the city.

Then how about the 125cc Blue Core Hybrid engine that is paired with this Yamaha Fazzio Connected? The first thing we felt was the response of the engine which 'kicked' even from the early rounds and felt smooth. Is it thanks to the hybrid? It turned out that the good engine response in the early rounds was helped thanks to the V-Belt distance on the CVT which was smaller than other 125cc Yamaha motorcycles. The output of the Blue Core Hybrid engine itself is 8.4 ps @ 6,500 rpm and a torque of 10.6 Nm @ 4,500 rpm.

Then what about the fuel consumption? Yamaha did the test using the full-to-full method with a distance of 19.9 km and the condition of the highways in the city of Bogor, West Java, which often encountered traffic jams, causing a lot of stop and go. Incidentally, we and several other media connected Fazzio with the Y-Connect application so that we could find out the fuel consumption directly after the city tour. Through the application, we get a result of 56.5 km/l while other media get a figure of 59km/l.

However, it turned out that after the full-to-full test method was carried out directly, our motorbike got a very surprising result, namely 75.09 km/l, other media also got 73.7 km/l. A fantastic number considering that we ride the motorbike like 'ngabers' who just open the gas suddenly after applying sudden braking. Even though during testing we were only able to reach a maximum speed of around 70 km/h because this time we were still following the group.

That was our impression when we tried the Yamaha Fazzio Hybrid Connected for the first time directly on the route in a typical Indonesian city. With comfort in the ergonomics triangle as well as response and good fuel consumption, but has a fairly hard suspension, does the Yamaha Fazzio qualify as the motorbike you want? Leave your best comments in the column below, and wait for our next daily Fazzio test.

"The Masters Real Estate" is official sales partner of Lahore Smart City and 1st Smart City which is Capital Smart City . We are one of the most enticing options on the planet of real estate. Our prestigious forum provides the potential solution of all your ambiguities regarding the purchasing of shops, lands, and houses.

We have engaged our teams in various cities of Pakistan as well as the online world to make our services accessible. The provision of reasonable price real estate properties by our company is attracting the residents and the foreigners. We have intended to provide luxurious construction projects and houses at affordable prices to our nation. One more socity launch soon which is Faisalabad Smart City .

I found some excellent tips from this blog. Absolutely worth reading out. Without this content i wouldn’t have come to know about this Junk Car Removal Pinelands company. It is amazing!

I must say it is full of informational blogs. Thumbs up! It’s good to see so many positive customer reviews and happy clients! By choosing. Car Valuation Melbourne you can get your car removed and receive cash up to $9,999. With minimal paperwork and free towing, rest assured your car is in good hands. So, why wait to avail the best cash for cars offers.

Appreciating the time and effort you put into your website. Searching to remove your Car for Cash? Metal Biz Recyclers warm-heartedly greets every customer with any car they have. With our 100% customer satisfaction, you can easily get Cash for cars Brisbane up to $9,999. Our skilled team will be at your doorstep to remove your unwanted car the same day you get a free quote from us. It’s a good day to avail of our offer.

Awesome article! I want people to know just how good this information is in your article. APlus Car Removal welcomes anyone with any make, model, or condition of the car. Our professional team comes to your given location and quickly removes the car for free and offers the highest cash amount up to $25,000. Get an amazing Cash For Car Ipswich offer with guarantee.

Good Quality Article, Adrians Metal Recyclers makes it easy for you to cash in on your old junker! We pay cash for cars Gold Coast and can come to wherever you are. For a free online quote, please fill out the online Free Form or give us a call.