In a video that went viral on social media, Ukrainian President Volodymyr Zelensky surrendered to Russia. It turned out that the video was a deepfake and has now been removed by several social media platforms.

The deepfake video was first broadcast by Ukrainian news site TV24 after the alleged hack. The video shows Zelensky standing behind the podium and declaring that Ukraine has decided to return the Donbas to Russia and admits their fight has failed. 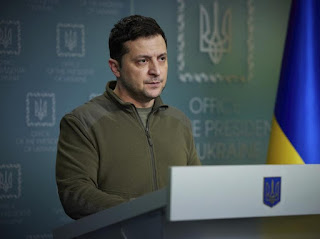 The quality of the deepfake video is very poor and looks fake. In the video, Zelensky's head looks too big and a little blurry compared to the rest of his body.

His face also kept looking straight ahead and his hands didn't seem to move. His fake voice also sounded deeper than his real voice. The video can be seen below and is clearly marked as a deepfake.

Facebook and YouTube immediately moved quickly to crack down on the deepfake video. Meta's Head of Security Policy Nathaniel Gleicher said the video had been removed from his platform.

"Today, our team identified and removed a deepfake video that claims to show President Zelensky issuing a statement he never did," Gleicher wrote on his Twitter account, as quoted from The Verge, Thursday (17/3/2022).

"The video appeared on a website that was allegedly hacked and then started showing it on the internet."

YouTube spokeswoman Ivy Choi said the video and its reuploaded version had been removed from the platform for violating its misinformation policy. A Twitter spokesperson said it was closely monitoring the spread of the video and would take strict action if caught violating company policies.

Earlier this month, the Ukrainian government warned soldiers and civilians to be careful if they came across videos of Zelensky on the internet, especially if he announced his surrender to Russia.

"As for the latest childish provocations with calls to lay down arms, I only call on the troops of the Russian Federation to lay down their weapons and go home. We are here and will defend Ukraine," Zelensky said.

This is a really decent site post. Not very numerous individuals would really, the way you simply did. I am truly inspired that there is such a great amount of data about this subject have been revealed and you've put worth a valiant effort with so much class. Purple BAPE Hoodie

Great article! All the articles you have, they enjoy reading and learning a lot. Your article is very helpful for me. I hope you will continue to write such good articles as well. Really enjoyed reading your blog.It is highly informative and builds great interest for the readers. For the people like us your blogs helps to get ideal information and knowledge. Thanks for providing such blogs. Le Mans Jacket