Tottenham Hotspur picked up a valuable victory for the hope of finishing in the top four. Cristian Romero and Harry Kane won the Lilywhites 2-0 over Brighton & Hove Albion.

Tottenham travel to the Amex Stadium, Thursday (17/3/2022) early in the morning WIT in the continuation of the English League. The visitors appeared dominant throughout the game and spread many threats. 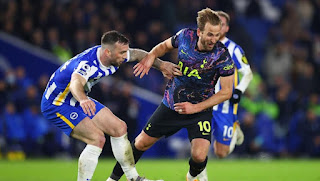 A mistake in the first five minutes of the Brighton defense almost put Tottenham ahead. Lewis Dunk's poor cross back was controlled by Harry Kane, but his shot went wide.

Tottenham took the advantage in the 37th minute. Son Heung-min played the ball for Kulusevski, who then shot. His shot hit Cristian Romero and went into the net.

Kulusevski's strike in the 42nd minute almost doubled the score for Tottenham. But Robert Sanchez blocked it with his feet.

Kane's free-kick at the end of the period slid thin over the goal. The first half finished 1-0 to the visitors' advantage.

Kane doubled Tottenham's score in the 57th minute. Starting from a quick attack, Rodrigo Bentacur's through ball was controlled by Kane who calmly beat the goalkeeper.

Sergio Reguilon's chance in the 72nd minute failed after Sanchez blocked with his feet.

Tottenham had a number of other chances in the remaining time, two of them from Kane and Reguilon. However, nothing resulted in additional goals.

This result brought Tottenham up to seventh position in the standings with 48 points from 28 matches. Brighton are in 13th place with 33 points.

There may be noticeably a bundle to know about this. I assume you made certain good factors in options also.
토토
경마

After study a few of the blog posts on your website now, and I truly like your way of blogging. I bookmarked it to my bookmark website list and will be checking back soon. Pls check out my web site as well and let me know what you think.
바카라
토토

Thanks for your own effort on this web page. My mom loves getting into research and it’s really easy to understand why. My partner and i learn all relating to the compelling means you give very useful tricks by means of your web site.
majortotositecom1
racesitepro1
oncasinositenet1
totopickpro1

I was looking for another article by chance and found your article 룰렛 I am writing on this topic, so I think it will help a lot. I leave my blog address below. Please visit once.

In my opinion, the item you posted is perfect for being selected as the best item of the year. You seem to be a genius to combine 안전놀이터 and . Please think of more new items in the future!