Red Velvet's Exciting Moments at the 2022 Indonesia Festival that You Should Know! -->

Red Velvet's Exciting Moments at the 2022 Indonesia Festival that You Should Know!

Even though the Indonesia Festival has passed, the feeling of Reveluv's flowers will still be there. Last Saturday, May 21, Red Velvet successfully enlivened the Istora Senayan stage. The five beautiful members finally returned to Indonesia after not visiting Indonesia for a long time. 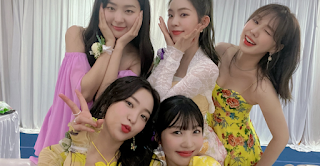 Feel My Rhythm opens the stage

Different from NCT Dream, which immediately opened the event, for the second day, many local stars opened the stage first. Just before the last segment, Red Velvet came with its summer outfit. The five members immediately performed the most phenomenal song recently on TikTok and Reels Instagram, namely 'Feel My Rhythm'.

Just like NCT Dream, Red Velvet also performed 4 favorite songs and b-side tracks, namely 'Feel My Rhythm', 'Queendom', 'Hello, Sunset', and 'Red Flavor'. Although there is no 'Psycho' that Reveluv has been waiting for (as Red Velvet fans are called), but the appearance of the 4 songs that was sung was enough to shock the fans who enjoyed the performances of Irene, Joy, Wendy, Seulgi, and Yeri.

Recently on social media, the song 'Feel My Rhythm' has been buzzing. In fact, not only Reveluv who participated in the challenge, but non-k-popers also moved their bodies like Joy's dance. Yesterday when the ment took place, before playing games. Joy had time to teach her dance part 'Feel My Rhythm' which is often followed by many.

The fun doesn't stop there. When playing games, the members are asked to guess an object that is taken and demonstrate its use. At that time, Wendy got a broom, Irene got an iron, while Seulgi got a microphone. When will you see Red Velvet act like housewives? Only at the Indonesia Festival, Wendy swept with her beautiful style.

Both K-popers and non-K-popers will definitely be familiar with Red Velvet's song 'Red Flavor' which reads "Ppal ppal ppalgan mat". With an interesting and catchy intro, the song 'Red Flavor' successfully shook Istora Senayan, because many people really liked the song. That night was very lively with singing from Reveluv who was present.