Companies Owned by Elon Musk, The Richest Man on Earth -->

Companies Owned by Elon Musk, The Richest Man on Earth

Elon Musk is the richest person in the world today. In fact, he currently occupies the first position on the Forbes list of the world's richest billionaires in 2022.

Quoted from Forbes, Thursday (2/6/2022) Elon Musk's total wealth is US $ 225.5 billion. He also had shocked the public last April. The 50-year-old has also added to his business portfolio, by acquiring Twitter for $44 billion.

Elon Musk is known as the CEO of Tesla. However, apart from Tesla, Musk also has a number of companies that are the source of his wealth. Then, what are the list of companies owned by Elon Musk? 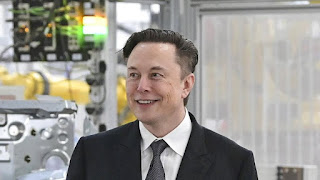 Quoted from the Yahoo! Finance, here is a list of Elon Musk's companies:

Elon Musk founded SpaceX in May 2022. SpaceX is the only private company, that returns spacecraft from low-Earth orbit, as well as transporting humans back and forth from the International Space Station.

Musk's mission of creating SpaceX was to make access to space faster and cheaper. So, in the end he could create a human colony on Mars. To date, SpaceX has launched 144 rockets and spacecraft, 106 of which have successfully landed in space.

Elon Musk's popularity soared when he became known as Tesla CEO since 2008, even though he was not the original founder of this American electric vehicle and clean energy company. Tesla Inc. was founded in July 2003 by Martin Eberhard and Marc Tarpenning, who played an active role in the company's early development prior to Musk's involvement. Tesla is the number one auto company in the world by market capitalization of nearly $1.28 trillion as of April 2022.

With an investment of $9.15 million in a Series A funding round in February 2004, Musk became a majority shareholder and joined Tesla's board of directors as chairman. According to Forbes, Elon Musk owns 21% of Tesla. Tesla's first commercially available car, the Roadster, was launched in 2009 under Musk's tutelage.

Solarcity was the second largest provider of solar systems in the US in 2013. Musk's cousins, Lyndon and Peter Rive, founded SolarCity in 2006. The initial concept and financial capital for SolarCity was financed by Musk.

Tesla acquired SolarCity in 2016 for $3.66 billion, and merged it with its battery energy storage products division to create Tesla Energy.

The Boring Company completed the tunnel under the Las Vegas Convention Center, in early 2021. Further expansion of this tunnel system has been approved by local officials. The company raised $951 million in April 2022, and is now worth nearly $5.7 billion.

Elon Musk has agreed to buy Twitter for $44 billion on April 25, 2022. However, Twitter is not yet officially his, because it still has to go through a regulatory process.

In addition, there was also a drama buying Twitter by Elon Musk. After Musk announced he would be suspending the acquisition process, due to fake accounts and bot issues, Twitter was adamant it wanted to work things out. Based on detikcom's records, this was revealed from the official statement of the Twitter board of directors given to CNN Business. The statement emphasized the terms of the acquisition agreement, and it looks like Twitter is ready to 'force' Musk to complete the transaction process.

Musk founded OpenAI in 2015. OpenAl is a non-profit artificial intelligence (AI) research company, which aims to develop artificial general intelligence. While he stepped down from the board in 2018, Musk has continued to be a major funder. In 2019, OpenAI LP received a US$1.4 billion investment from Microsoft.

Musk has reportedly invested heavily in DeepMind Technologies. which Google now has to stay informed about how fast technology is developing. The company claims it wants to 'solve intelligence'. by combining computer technology and neuroscience to create 'artificial general intelligence'.

Well, that was the list of companies owned by Elon Musk.