Finalissima's Beautiful Victory (Argentina vs Italy) in the eyes of Messi -->

Finalissima's Beautiful Victory (Argentina vs Italy) in the eyes of Messi

London - Argentina appeared dominant over Italy when they won at Finalissima. The Albiceleste captain, Lionel Messi, was delighted with the result. 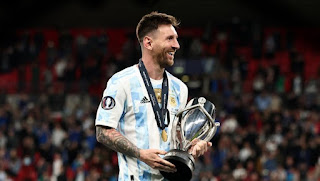 The finalissima between Italy vs Argentina was held at Wembley Stadium, London, England, Thursday (2/6/2022) early morning WIB. Argentina won the match between the European Cup and Copa America winners with a score of 3-0.

Argentina appeared dominant in that match. The 2-0 advantage was immediately obtained from the first half. Lautaro Martinez took a 1-0 lead in the 24th minute, which Angel Di Maria doubled at the end of the first half.

In the second half, Argentina beat Italy out. Messi and Di Maria became a scourge for the Gli Azzurri defence, which was saved by many saves from goalkeeper Gianluigi Donnarumma.

Argentina could then add one more goal in injury time. Paulo Dybala, a new arrival, got his name on the scoreboard, and ensured Argentina's 3-0 win over Italy.

Messi, who provided assists for Lautaro and Dybala's goals, said he was happy to have won the game. For him, beating Italy, which incidentally is a strong team, was so beautiful.

"It was a beautiful final, full of Argentineans. What we are living here is very beautiful," said Messi, as reported by the Mirror.

"We are here to play against anyone. Today was a good test, because Italy are a great team."

"We knew it was going to be a good game and we were happy to be champions," explained the owner of the 7 Ballon d'Or titles.