The commemoration of National Father's Day itself has only started since 2016. 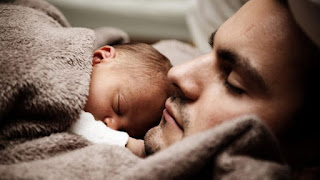 Illustration. There are some unique but touching National Father's Day greetings. (sarahbernier3140/Pixabay)

The idea of ​​father's day stems from many questions about when Indonesia commemorates the figure of a father. Not a few people think that the father figure is quite important in a family.

After going through a long process, PPIP then declared a National Father's Day in Surakarta, Central Java, on November 12, 2016. Declarations were also made in Maumere, Flores, East Nusa Tenggara.

Basically, National Father's Day is celebrated to emphasize the importance of a father figure in a family.

There are many ways to commemorate this moment. In today's era, special moments like Father's Day can be commemorated online by uploading various greetings on social media.

Here are some Father's Day greeting ideas that you can copy. This greeting can be conveyed from child to father, wife to husband, or between fathers.

1. A child will not be able to stand alone. There was something standing behind him, the most powerful moral force in his life, namely the love of his father. Happy Father's Day!

2. When we were little kids who didn't know anything, we thought that the father figure was Superman. Then, as we grow up, we realize that dad is just an ordinary man wearing a robe.

3. Happy Father's Day to all 'fathers' in Indonesia! Being a father is the greatest thing we can do.

4. Father gives son a dream. Thanks to dad, I can see the future.

5. The greatest respect a boy can give his father is to say, 'When I grow up, I want to be like my father'.

6. Anyone can be a father. But, it takes a special person to be a father. And that's why I call you 'daddy', because you are so special.

8. The best father is an unsung figure, not praised, not noticed, but becomes a valuable asset in society. Happy Father's Day!

9. A father is the only friend we can always rely on.

10. Dad is an ordinary man who was transformed by love into a hero. Happy Father's Day!

11. Happy Father's Day! Remember, a father's heart is a masterpiece of nature.

12. The tears and fears of a father will not be seen. His love is also inexpressible. However, his care and protection remained a pillar of strength throughout his life.

That's the idea of ​​​​National Father's Day sayings that you can copy. Happy commemorating!