Thor: Love and Thunder Release Today, Check Out the Synopsis -->

Thor: Love and Thunder Release Today, Check Out the Synopsis

For those of you who are fans of superhero films produced by the Marvel Cinematic Universe (MCU), don't miss watching Thor: Love and Thunder.

Chris Hemsworth will star alongside Natalie Portman, as Jane Foster and Christian Bale in Thor: Love and Thunder.

Before watching the movie Thor: Love and Thunder, the admin tells the synopsis below: 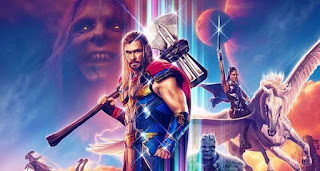 This film tells about the state of the world that began to peaceful after the fall of the Kingdom of Asgard.

After the Asgard Kingdom collapsed, Thor finally decided to leave Earth and the Guardians of the Galaxy.

Thor's goal in leaving is to try a new life like the normal human audience and decides to stop being a superhero.

Thor considers that his position as a superhero has ended and decides to travel across the galaxy with Korg.

Unfortunately a new enemy reappears on Earth. The enemy is named Gorr who is known as the God Slaughterer.

Thor realized how dangerous Gorr's presence was so he asked for the help of the Valkyrie King, Korg, and Jane Foster.

Jane Foster, who is Thor's ex-lover, is surprisingly able to control the Hammer of Mjolnir.

Finally he became Mighty Thor, his strength and abilities increased like a superhero.

How will the story continue? Watch the film in theaters.***